What was the Wild West? The Wild West was the part of the west of America, mainly just east of the Sierra Nevada and west of the Rockies, that was a pioneer farming and gold mining area in the 1860s to 1890s, and where the rule of law was often not enforced.

A re-enactment of people gunfighting in the Wild West.

The ‘American Frontier’, from the point of view of the new colonists, began on the east coast of North America the first time the Spanish, French, Dutch and English landed and set up colonies.

To the people who had lived in North America for thousands of years, the land was not a frontier. It was where they lived. So the moving American Frontier is also a story of the way the native peoples were forced to retreat west ahead of the advancing wave of colonists who poured into the great eastern ports of America during the 19th century. By the end of the century the native peoples would be completely overwhelmed and forced to live in places that colonists could think of no use for‚ and if they could, the native peoples were moved again. You have to see all of this in the context of the time. Yes, it was a conquest of native peoples, but the colonists saw it as a struggle for survival. They had struggled in Europe where they came from. They simply transferred their struggle when they sailed to the New World.

Over a couple of centuries, the first colonists created farms and prosperity for themselves. Then some of them sought to gain independence, and they succeeded. This gave a whole new confidence in the future. It was a sense that they had overcome one great obstacle. Now, surely, they could overcome anything. And the next horizon was out west. If they had gained independence, then it must be the people’s ‘Manifest Destiny’ (God-given right) to win over the whole country, from ‘Sea to Shining Sea’ (from the Atlantic to the Pacific Oceans).

As a result of this history of expanding from the east, Americans have always seen the ‘West’ as a frontier. It has always been the most exciting place to be. Now there is no more frontier, the far west and California remain in people’s dreams.

By the 19th century Explorers Lewis and Clark had already been to the Pacific coast and reported back to government about what they had found. They began their exploration from the banks of the Mississippi near St. Louis. As it happened, at just this same time, the whole middle of America (which had been the French territory called the Louisiana Territory) was sold to the new United States government. And the government wanted this new land filled – quickly.

In the early years of the 19th century, this expansion west of the Appalachians brought real threats to the native Americans who lived on the plains (and who nowadays mostly prefer to be called American Indians). Their allies were the British, who proposed setting up an independent Native American state. The British wanted to put a stop to American expansion; the American Indians wanted to retain their land. Neither succeeded and the Indian wars of 1812-3 were the last real battles between American colonists and native American peoples.

Americans were on the march. As an area was settled, the settlers could apply for ‘Territory’ status. When the number of settlers in an area reached 100,000, they could apply for statehood. As a result, by 1800 the western frontier was at the Mississippi River. St. Louis, at the junction of the Mississippi and Missouri rivers, was the largest town on the frontier, and it was the gateway for travel west.

The race west was partly individual families trying to make a living, but it was also a game of high politics. The politicians who opposed slavery wanted the new lands out west to be owned by families who would work the land for themselves and not need slaves. This would reduce the influence of the slave-owners. In the 1840s, such people declared that it was the Manifest Destiny of the United States to own all the land westwards – and they won elections on the back of it.

Helping settlers move westward were the emigrant “guide books” of the 1840s featuring route information supplied by the fur traders and explorers. They all promised fertile farm land beyond the Rockies. The Mexicans, who owned both Texas and California at this time, had never been able to use the land profitably.

A series of battles, including the massacre of some famous Texans (such as William Bowie and Davy Crockett) at the Alamo, led to the Mexican-American war. The Mexicans lost and huge areas of North America were turned over to the Americans, including Texas and California. The only thing that stopped the Americans from taking over the whole of Mexico as well was that their cultures were so different that people asked “what would the U.S. do with eight million Mexicans?”

So although, before this, there was a steady trickle of pioneers moving west along a northern route called the Oregon Trail (see another book in this series) the fact that the west was now United States owned meant that the trickle became a flood.

Soon there were people all over these western plains and mountains. But it all happened so fast that the system of government and law and order did not catch up, and local arrangements had to be made. When you hear the words ‘Wild West’ you might think of cowboys, ranches and cattle drives, American Indians, gun fights, saloons with swinging doors, people in covered wagons, stagecoaches, and gold miners. All of these things were part of life in the west. You might also think about violence, gunfights, shoot-outs, bank robberies, and horse rustling and, of course outlaws with ‘Wanted, dead or alive’ posters. This was also part of the west, although there was not as much violence as people often think. 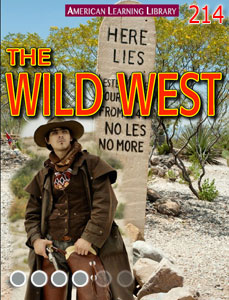 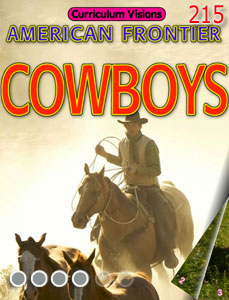