What is Snowdon? Snowdon is the highest mountain in England and Wales, whose shape has been altered by the recent Ice Age to make a pyramidal peak.

An aerial view of Snowdon.

There is pressure from tourists in all weathers now.

Snowdon (Welsh: Yr Wyddfa) is the highest mountain in Wales, some 1,085m (3,560ft). It is the centrepiece of Snowdonia National Park in North Wales. It is the busiest mountain in the United Kingdom. About 700,000 people visit it each year including 140,000 by the famous Snowdon railway. This makes it the third most visited attraction in Wales.

Snowdon's rocks are very old. Around 400 million years ago, this area was a scene of great volcanic activity, with lava during out of massive volcanoes, and ash being thrown out of volcanic vents to settle and turn into rock. Snowdon is actually cut into a volcanic ash layer, which, over the years has become very hard and dense.

For most of its life, Snowdon, and nearby summits, have been eroded by rivers, but the most recent Ice Age changed the landscape dramatically. At this time several glaciers formed in the headwaters of the rivers on the mountainside and wore them away into deep hollows. In Wales such hollows are called cwms (also called cirques and corries elsewhere), and these are now filled with lakes. In between them knife-edged ridges (called aretes) were left. The result of this erosion has created a pyramidal peak, one of the best in the UK.

Two of the aretes make the walking trails of Crib Goch and Y Lliwedd that tourists use. For those not attracted to walking, the rack and pinion, Snowdon Mountain Railway, which opened in 1896, takes passengers the 5ml/8km to the summit railway station.

The glacial features of Snowdon.

You can search in this book: 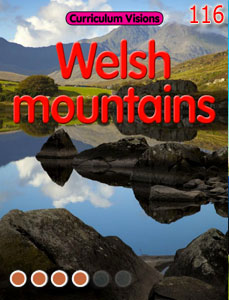