Guglielmo Marconi, was born in 1874. He was an Italian inventor. He is often credited as the inventor of radio, although he was mainly the developer of other people's ideas. He shared the 1909 Nobel Prize in Physics with Karl Ferdinand Braun "in recognition of their contributions to the development of wireless telegraphy".

Marconi was most importantly a businessman, who saw an opportunity and knew how to develop it. It was he who succeeded in making a commercial success of radio, by building on the work of previous experimenters. Marconi was born into the Italian nobility. However, between the ages of two and six, Marconi was brought up by his mother in the English town of Bedford.

During his early years, Marconi had an interest in science and electricity and began working on the idea of "wireless communications. It was not a new idea but scientists were interested in radio for its own sake, not in the way it could be used to replace telegraph wires.

Marconi was twenty when he began to conduct experiments in radio waves, building much of his own equipment in the attic of his home. In December of 1894 he demonstrated a radio transmitter and receiver that made a bell ring on the other side of the room by pushing a button on a bench.

Marconi was living in Italy, where there was no interest in his setup, so he went back to England. Marconi soon got the interest and support of William Preece, the Chief Electrical Engineer of the British Post Office.

On 13 May 1897, Marconi sent the world's first ever wireless communication over open sea. The message read "Are you ready".

Marconi sailed to the United States and on his return Marconi on 8 November 1899 he and his assistants installed wireless equipment aboard during the voyage. On 15 November his ship became the first ocean liner to report her return to Great Britain by wireless when Marconi's Royal Needles Hotel radio station contacted her 66 miles off the English coast.

On 17 December 1902, a transmission from the Marconi station in Nova Scotia, Canada became the world's first radio message to cross the Atlantic from North America.

The role played by Marconi Co. wireless in maritime rescues raised public awareness of the value of radio and brought fame to Marconi, particularly due to rescue messages sent out in the sinkings of the RMS Titanic on 15 April 1912 and the RMS Lusitania on 7 May 1915.

Marconi died in Rome in 1937, and Italy held a state funeral for him. At 6 pm the next day, the time designated for the funeral, all BBC transmitters and wireless Post Office transmitters in the British Isles observed two minutes of silence. 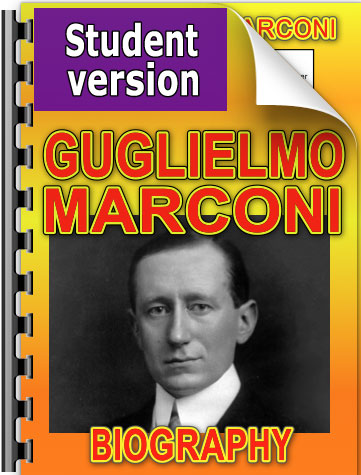